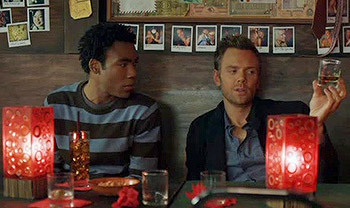 Troy is having his 20th birthday and the whole study group is celebrating. But wait a second—Troy was held back a year in fifth grade! It's actually his 21st birthday. As in legal drinking age. Time to hit the bars.

The rest of the episode revolves around the group's night on the town. Annie adopts the persona on her fake ID and has a crisis of confidence. Abed talks Farscape with a fellow Sci-Fi geek and gets hit on. Shirley tries to hide pictures showing the fact that she used to be a regular in this bar. Jeff and Britta continue arguing over which bar is cooler, L Street or the Red Door, and consume one too many drinks.