One of the Girls 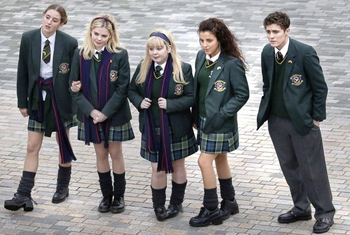 One of the Girls describes a man whose primary friendships are with women, as opposed to with other men. These male characters tend to be less stereotypically masculine than the other guys and they provide a contrast with the other men presented in the work. Some may even be In Touch with Their Feminine Side and enjoy the things women are traditionally into, such as fashion or cooking/baking, and don't like to play rough, preferring quieter activities.
Advertisement:

One key aspect to a boy being One of the Girls is that the girls do not see him as a potential Love Interest; he's "safe" as in they don't have to worry about him trying to get with any one of them or any ulterior motives. He and the girls are usually Like Brother and Sister, platonic Childhood Friends, or raised together in which the Westermarck Effect is in full force. Either way, the guy in the equation is not pushy about hooking up with his female friends. Which isn't to say that romance is not in the equation, though there will be much angsting about breaking up the friendship group.

A common plot with these types of men are their lack of male friendships and how they're seen as a "simp"note The most common definitions being either a Love Martyr or an Extreme Doormat who puts the girls on a pedestal at his own expense, regardless of if either is actually happening by other men. A consistent character conflict is just how "macho" they are compared to their male peers. Oftentimes, the guy in question is gay, which completely removes any romance option and the girls can just be friends with him. The gay guy is most likely to also have some Camp Gay characteristics, which will make him have a lot in common with his girl friends. A Gay Best Friend (especially if the series is more about the girls than him) usually falls in line with this flavor. But if the story makes it clear that he's into girls (which most of the time aren't part of the group, as he knows it'll ruin the dynamic) then he'll instead be Camp Straight.

The guy is always a Nice Guy or a nerd or The Quiet One, and usually makes up the "guy" part of Two Girls and a Guy if not already The One Guy in a larger group. Also seen in the Harem Genre, with non-love interests of the main male character.

See One of the Boys or Fag Hag for the Distaff Counterpart.