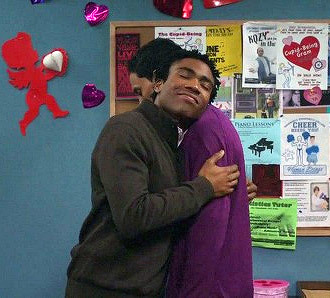 On Valentines' Day, when Jeff has an argument with the study group over the Barenaked Ladies (and, less contentiously, Pierce's increasing dependence on his painkillers), Professor Duncan uses the opportunity to invite himself over to Jeff's place to watch the Liverpool vs. Manchester United soccer match on Jeff's big screen TV — a plan which gets a lot more complicated when Chang overhears and, for his own nefarious purposes, invites himself along as well... as well as a few other people. Meanwhile, Britta is thrilled to have made friends with a lesbian, which causes her to lord her hip liberal cred over Annie — until Annie discovers something Britta doesn't know about her new friend. Troy and Abed find themselves both attracted to a woman who works in the school library. And the increasingly erratic and unstable Pierce is finding himself torn over choosing between his friends and the tiny man who appears when he takes his pills.