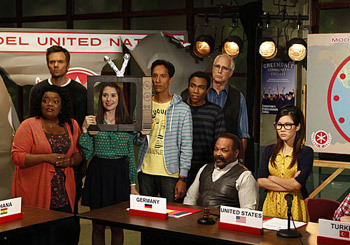 Annie is initially pleased when she meets Annie Kim, a fellow student in her political science class and if anything an even more determined overachiever. She's less happy when Other Annie takes her idea of a Greendale Model United Nations and makes it official. Annie responds by forming her own model UN with the biology study group. Their teacher (guest star Martin Starr) approves the idea of a model UN face-off.

Not participating, at least not inside the hall, is Britta. Jealous of an old classmate who's being held as a political prisoner in Syria, she haphazardly sets out to get back in touch with her rabble-rousing roots. Her wish to be a notorious troublemaker dovetails with Chang's desire to be a brutal cop.

The Community episode "Geography of Global Conflict" provides examples of: