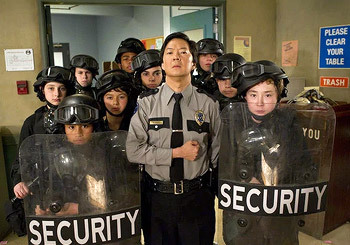 The school decides to hold a memorial wake for the deceased Star-Burns, and the study group are called upon to deliver the eulogies by the Dean — which, seeing as the study group are nursing a certain amount of bitterness over the fact that, as a result of Star-Burns' death, they will have to repeat Biology over summer school, turns out to be a mistake. One riot later, a scapegoat is needed, and the study group and the Dean elect to nominate Chang who, with his pre-teen army of security interns and new security powers, is rapidly becoming Drunk with Power. Only Chang has other ideas. ...