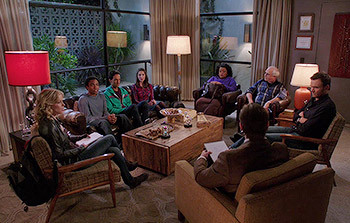 Two months have passed since the "Greendale Seven" were expelled. Having spent the intervening time drinking, eating unhealthy meals at Troy and Abed's apartment, and generally dwelling on their years at Greendale to an obsessive degree, they are forced to face their situation when Abed is discovered in full Inspector Spacetime costume on the community college campus again. Taken into custody and insisting that the Dean has been replaced by a fraud, he is given the choice between therapy and jail time, and the entire group accompanies him to see a recommended psychiatrist (John Hodgman). Soon, however, they discover that all may not be as it seems and the therapy visit could change their lives forever.