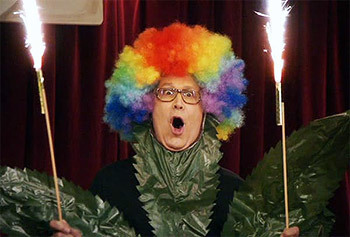 Drugs Are Good!
Kid: Hey, you're not Drugs!
Chang: Oh, but I aaaaaaam! Disappointed? Did you expect me to stay the same forever? 'Cause that's not what Drugs does, baby! I'm gonna deep fry your dog and eat yo momma's face, and I'm gonna wear your little brother's skin like pajamas! I control your lives, and there is nothing you can do.

The study group is helping Annie put on a play to educate about drugs. Pierce has some ideas on how to ‘improve' the performance, and follows Annie home to discuss these changes. After assisting Annie with a financial problem, he uses this leverage to get his changes to the play. When Pierce's scene-stealing antics threaten to ruin the message, only Chang is able to right this wrong.