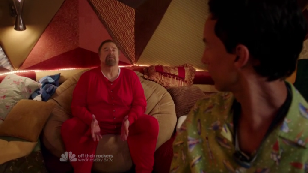 Still angry over Dean Pelton giving the sandwich shop contract to Subway, Shirley and Pierce send Britta to seduce and get dirt on the company's representative at the school, also named "Subway." The plan gets complicated when Britta and Subway develop feelings for each other.

Abed and Troy plan to build another fort, but differ over whether to build a pillow fort or a blanket fort, and Vice-Dean Laybourne stokes resentment between the two.

Jeff finds that he offended a student named "Kim." Annie tries to help him atone when they find out that Kim is dead.