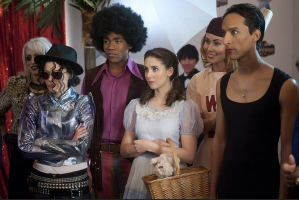 The group as both versions of Michael Jackson, Judy Garland, and Jamie Lee Curtis.
After reuniting following the midterm break, Jeff reveals that he has been seeing a psychiatrist and has been prescribed powerful anti-anxiety medication — so powerful, in fact, that it has caused his narcissism and ego to swell completely out of control. As he very quickly becomes insufferable, Britta applies her psychological know-how to try and find a way to bring him back down to earth. Meanwhile, Abed has gotten in debt to a celebrity impersonator, forcing the study group to take on various celebrity roles in order to help him get out of it. And a rift threatens to form between Troy and Abed.