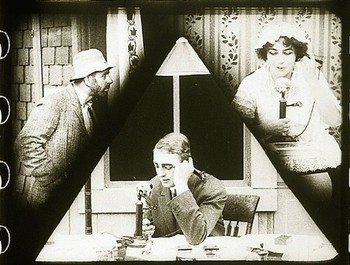 As with most early short films the story is simple. There's a wife (Lois Weber), a baby, and a maid at home, while the husband (Phillips Smalley) is off in an office somewhere. The maid, not liking her position, quits immediately, without notice. As soon as the maid leaves, a scary-looking tramp arrives. The maid, on the way out, left the key under the front mat. He lets himself in, while the terrified wife calls her husband. The husband steals a car parked out front of his business, and goes off on a high-speed chase back home, the police following him for grand theft auto. Meanwhile, the hobo picks up a butcher knife in the kitchen and goes after the wife.

Some sources state that Lon Chaney was an extra in this film but that does not appear to be the case.