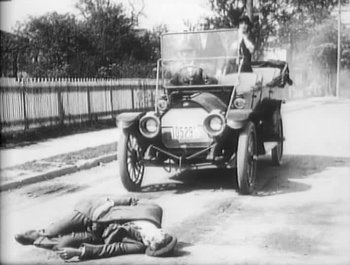 Don't do it!
Advertisement:

Fraunie is a businessman who has a rich girlfriend, Marian. After Fraunie is ruined in the stock market, he breaks off his engagement to Marian. Marian offers to bail him out, but he refuses. Marian then hits on an idea: she will fake a telegram to Fraunie in which he is told he will receive a large inheritance, but only if he marries that day. However, Marian doesn't consider that the time pressure might lead Fraunie to marry someone else.

Alice Guy-Blachè was film's first female director. She happened to see one of the first screenings of the Lumière Films in 1895 and within a couple of years was making her own movies; she worked until 1920.