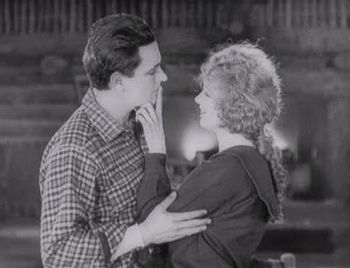 That's one of her two adopted dads.
Advertisement:

The Chechahcos is a 1924 silent film set during the 1897 Klondike Gold Rush. Among the many pilgrims attracted to the Great White North during the gold rush are the Stanlaw family, consisting of Professor Stanlaw, his wife Margaret, and their adorable little daughter Ruth. Also on the boat are Richard Steele, gambler and all-around bad guy, and two prospecting partners, "Horseshoe" Riley and Bob Dexter.

A boiler explosion results in the boat sinking. Professor Stanlaw goes down with the ship. Margaret survives, and, believing her husband and child to be dead, she eventually becomes the kept woman of Steele the gambler. However, Ruth actually survives the sinking as well, rescued by Riley and Dexter. Riley and Dexter find out that Mrs. Stanlaw is alive, but after making some premature conclusions about her and Steele, they elect to raise the child themselves. Years go by as Ruth grows up under the protection of her adopted guardians—but fate eventually brings all the principals together again.