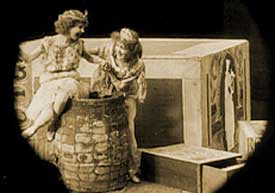 Fairies in a tobacco pipe!
Princess Nicotine; or, the Smoke Fairy is a 1909 short film produced and probably directed by J. Stuart Blackton.
Advertisement:

Based on a musical play starring Lillian Russell, the five-minute film tells the story of a man who discovers two mischievous fairies hiding in his tobacco kit. Various hijinks ensue. The special effects were so impressive for 1909 audiences that none other than Scientific American magazine marvelled

at the film's technical prowess. Princess Nicotine was inducted into the National Film Registry in 2003.