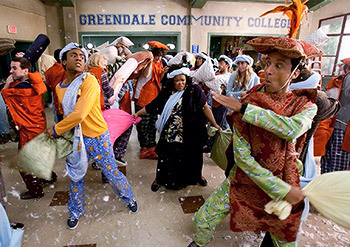 It was a battle that would forever change the lives of those involved...
"Between two groups of people who want to make inconsistent kinds of worlds, I see no remedy but force."
— Oliver Wendell Holmes

In 2012, a film-crew went to Greendale Community College to record an attempt to make the world's largest blanket fort. Instead, they recorded something very different; a bitter breakdown in relations between two best friends that would spill out into open hostility and which would divide the campus into two teams of violent enemies, resulting in the largest and longest pillow-fight ever seen at a community college — the conflict between the pillow fortress of Pillowtown, led by Abed Nadir, and the blanket fort of Blanketsburg, led by Troy Barnes. It was a battle that would change the lives of those who fought it while still being just a pillow fight.

The resulting documentary, "Pillows and Blankets", uses the witness testimony, status updates and text messages of those who were there to reconstruct both the conflict, devastation and increasingly hurt feelings on both sides and the difficulties of those split down the middle between the two, from the ministrations of battlefield nurse Annie Edison, to the blurry war photography of Britta Perry, from the divide in loyalties of Pierce Hawthorne and Shirley Bennett to the diplomatic efforts of Jeff Winger, who must decide between helping to patch up the broken friendship between his two friends or seizing an opportunity to avoid having to go to classes.