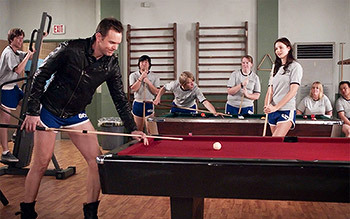 Jeff: Are you gonna talk about clothes like girls or are you gonna use tapered sticks to hit colored balls around a cushioned table, like a man?
Bogner: Balls, like a man!

Jeff learns a life lesson when he joins a pool class. The rest of the study group helps Abed out when they find evidence he has a secret admirer.