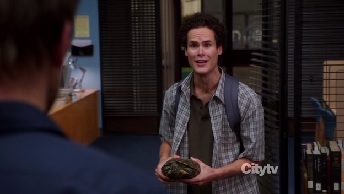 Your love is weird!! Offense taken!
Professor Kane assigns the Biology class a terrarium project. When the study group ends up with lab partners from outside the gang, they beg Prof. Kane to let them partner up among themselves, which he grants with some exasperation. However, the partnerships of Troy and Abed, Britta and Shirley, Jeff and Annie, and Pierce and outsider Todd have quickly noticeable compatibility problems and the study group decides to shuffle pairs, which quickly gets way too serious.
Advertisement:

Meanwhile, Chang's desire to be a police detective expresses itself as an idiotically mundane Film Noir, which eventually leads to him inadvertently starting a fire and his illegal living situation coming to light.