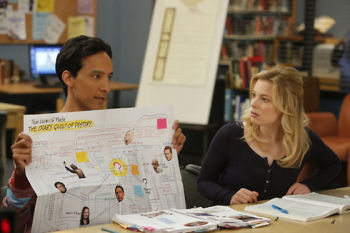 Abed calls it the Crazy Quilt of Destiny, mainly because the Loom of Fate was taken.
"You see, on the surface we seem like a group of people from diverse backgrounds who have become unlikely friends, but according to my research, our paths have crossed many times. We were destined to meet, like a team of superheroes. This... is our origin story."
— Abed
Advertisement:

For the group's graduation present, Abed maps out a Crazy Quilt of Destiny using collected ticket stubs and old receipts, to reveal that the study group's paths have all crossed each other's in everyone's Origin Story. We find out about Jeff's disbarring, the breakup of Shirley's marriage, Troy's lost football scholarship, Annie's breakdown and pill addiction, Britta's short-lived career as an anarchist and Abed's banishment from film school and how it all lead them to each other... and Greendale.