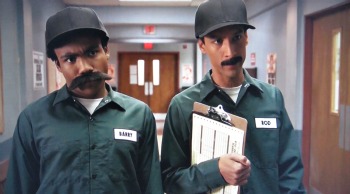 They're just plumbers. Really. In case of doubt, look at their mustaches.

Chang has kidnapped The Dean and replaced him with a Doppeldeaner. The study group attempts to free him on the night of Chang's "25th" Birthday Party, but the school has become a near-impregnable fortress, and in order to save the day Troy might have to make a great sacrifice.