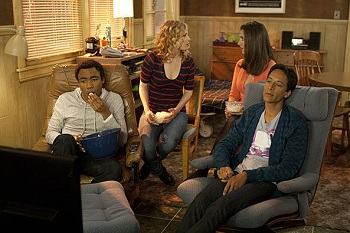 Talking about Blade while watching Blade.

The carnival is in town and that means bad news for Britta: someone she used to date works at the carnival and his name is Blade. As the study group laughs at that, Britta explains that Blade only needs to text her and she'll come running. So she gives up her phone to Annie and asks her to keep her addiction in check... by letting her stay at the apartment and making sure she never goes to Blade.

Meanwhile, Jeff is curious over just how exactly Blade does it, so he and Shirley go to check out the carnival and the duck shooting booth that Blade runs. They run into Pierce and Chang, who have decided to try being best friends.

And in a further subplot, Vice Dean Laybourne tries to make the Dean persuade Troy to enroll in the AC Repair School.

Tropes within the Community episode "Origins of Vampire Mythology":