Dream Tells You to Wake Up 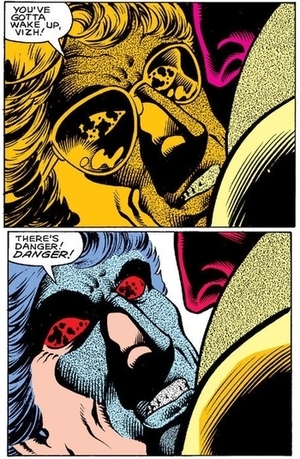 Coulson: I thought I'd lost you.
Rosalind: Nope. I'm still right here.
Coulson: I don't remember...
Rosalind: We overslept, which is nice. But now you need to get up.
— Agents of S.H.I.E.L.D.
Advertisement:

Our hero is not in the real world. He's inside a Lotus-Eater Machine, or just sleeping, unconscious or in a coma, and having a dream, while he should be awake and dealing with the things going on. Sometimes his friends will mount a Rescue from the Underworld and get inside the dream to make him aware of it, and then escape. But sometimes not. Sometimes it is a character from within the dream itself who tells the hero that everything is a dream, and that he has to leave. May involve a Dream Within a Dream, Crashing Dreams (when you're physically woken up) and result in a Catapult Nightmare. May have An Aesop about letting the past go, and not be trapped in nostalgia of the old days.

Contrast Dream Apocalypse, where the characters in the dream do not want the dreamer to wake up. If nobody openly tells the hero that he's dreaming, but he notices it anyway because some things do not make sense, then there's A Glitch in the Matrix. This trope does not necessarily take place in Soviet Russia.

It is not always revealed before that point that the dream is a dream, so this trope may include spoilers. Contrast Dream Deception for when the assertion that it's a dream is a lie.

Alice discovers that she's been dreaming this whole time and frantically tries to wake herself up to escape execution.

Alice discovers that she's been dreaming this whole time and frantically tries to wake herself up to escape execution.