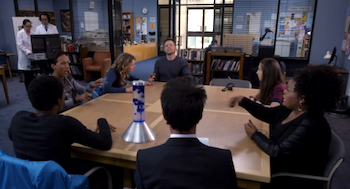 After Pierce's unexpected passing, a team of investigators headed by the no-nonsense Mr. Stone, arrives at Greendale to submit the study group to lie detector tests before they can be considered for distributions under the will.