Western Animation / The Red and the Blue 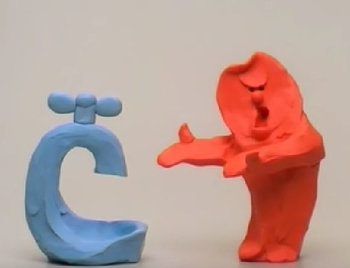 The Red and the Blue (Il Rosso e il Blu) was a 1976 Italian stop motion animated television series for children. It has two clay animated characters, antagonistic shapeshifters, one colored red, the other blue. It is by Misseri Studios.

The show sets the two characters in an undifferentiated white plane in which they interact. They are able to assume various forms at will, for example in one episode The Blue becomes a boat while The Red becomes an island, later the Blue becomes a suitcase while The Red partially converts his body into a chest-of-drawers, filling the suitcase with red 'clothes'.

This children's show has examples of: