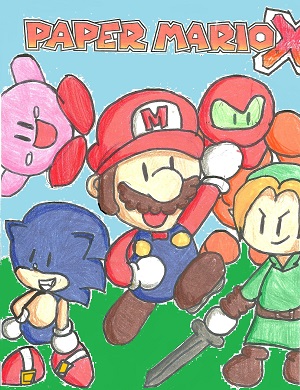 Created by Child at Heart Forever

, this is a series of fanfictions based on the Paper Mario series...with the twist of being a crossover.
Advertisement:

Telling the tale of the first three games, these stories place in characters from The Legend of Zelda, Sonic the Hedgehog, Kirby and Metroid with the main four Mario characters of the games. They come with four teams, each with different members:

Also includes an original story based on Luigi's quest to save Princess Eclair.

Now with its own characters page!

Word of God says that the fanfiction based on Paper Mario: Sticker Star is on the back burner for now, due to dismotivation and the fact that she, like most people, thinks Sticker Star is not a good game.

The stories can be found below.