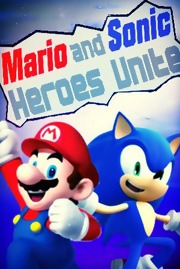 Mario and Sonic: Heroes Unite! is a Crossover Fan Fiction between the Sonic the Hedgehog and Super Mario Bros. franchises, created by Azurixx

. It can be found here

The story starts as any Sonic game would go: Sonic's Arch-Enemy Dr. Eggman attacks Empire City and Sonic goes to stop him. A fairly common task for Sonic.

That is, until a portal suddenly shows up and sucks Sonic, Tails, Amy and Eggman inside.

When Sonic goes back into his senses, he finds himself in the Mushroom Kingdom. Now he has to find a way to find the rest of his friends who also got sucked up return to his world. Unbeknown to him, though, an evil force, bigger than Eggman and Bowser's powers combined, is threatening both of their worlds...

Six years later, on Christmas Day of 2019, the author published a Christmas-themed oneshot set a certain amount of time after this fanfic, titled Mario and Sonic: Holidays Unite!

. Then, several months later, the first chapter of a sequel titled Mario and Sonic: Heroes Reunited!

, which is set 7 seven years later, was published.