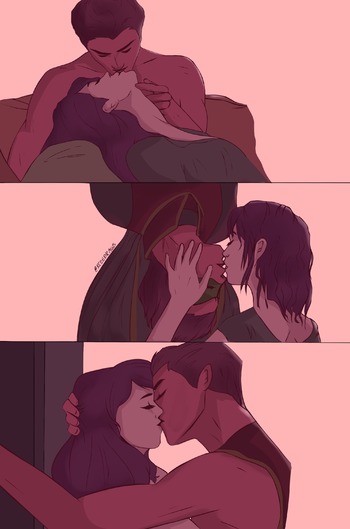 Art by kceedraws on Tumblr
I love how suddenly the miraculous fandom claimed Damian and decided he was a better pair for Mari than Adrien or Luka. Like someone just all of a sudden went:
"I know we have this whole complicated ship quadrangle going on and also other ships within the universe, but hear me out... What if... Mari goes to Gotham and... Ends up with the most problematic child of Bruce Wayne?!"
"You mean Jason?"
"No, no, Damian."
"Ok but why?"
"... Bad boy... Soft for sweetheart?"
Advertisement:
AND EVERYONE JUST WENT WITH IT
—Tumblr user stuff-that-makes-me-tired, summarizing the entire AU

It's been several years since the events of "Chameleon", and Lila has made good on her promise. Not only has she managed to turn all of Marinette's friends against her, but Adrien is sticking stubbornly to his pacifistic mindset and refuses to be of any help. And to make matters worse, Chat Noir has become utterly horrible, attempting to emotionally blackmail Ladybug into dating him by refusing to help with akuma attacks otherwise. Marinette is stuck.

Things finally start to look up for her, however, when the class takes a trip to Gotham City, and she meets a nice boy named Damian Wayne...

Created by Tumblr user ozmav, the Maribat AU is a Miraculous Ladybug/Batman crossover AU that focuses primarily on the relationship between Marinette and Damian, as well as Marinette's interactions with the rest of the Batfamily. The first part of the AU's core story can be found here.

A number of other people have written their own takes on the AU; the majority of these stories have been collected by the Tumblr account maribat-archive.

This AU provides examples of: