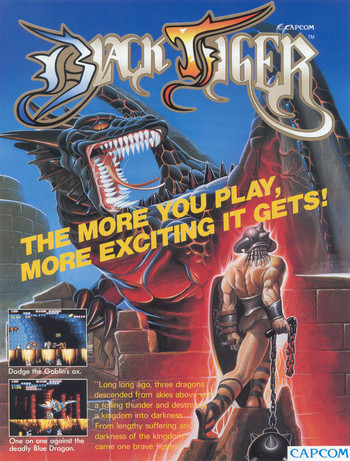 Black Tiger is an Arcade Game released by Capcom in 1987.

The player controls the hero, who is called Black Tiger, with an eight-way joystick and two action buttons: one to jump and the other to use the hero's whip. Black Tiger is a mighty warrior armed with a powerful weapon. His mission is to destroy the three fierce dragons that are terrorizing the kingdom. He can collect stronger weapons and armor during his journey, but he can only attack in the direction he faces.

Black Tiger can collect Zenny coins and ancient treasures by destroying urns. He can also revive a frozen shopkeeper, who may offer to sell him extra weapons, armor and vitality.

Has nothing to do with the 2017 mobile and PlayStation 4 game Life of Black Tiger.