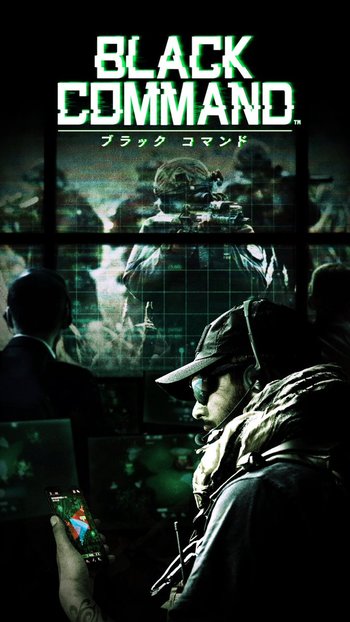 Now you can run your own PMC, from the palm of your hand via cellphone.
Advertisement:

Black Command (or ブラックコマンド in Japanese) is a 2018 Private Military Contractors Simulation Game that's available via Apple iOS or Android for smartphones in 20 countries by Capcom. The game was made by Capcom in-house with staff recruited from Resident Evil 7: Biohazard in cooperation with Japanese military hobbyist site Military Blog. The game currently supports English and Japanese language options, although European languages like French, German, Spanish and Portuguese were made available.

Due to circumstances beyond Capcom's control, they announced via in-app that the game will be discontinued worldwide after September 30, 2019. As of 2020, Capcom has quietly taken the app offline.

There's some plot to the game (via tutorial). The story takes place in the present day where players assume the role of a newly recruited contractor hired by Manda Securities for an upcoming operation somewhere in Makenene, where a civil war is taking place between the Wanato and Nutu ethnic communities. A MS contractor named Garheim is tasked to assist United Nations peacekeepers and is the recruit's training officer.

During anti-Nutu operations, the team rescues a Wanato officer named Dufusi. After an incident where Garheim is spotted running guns and other military equipment for the Nutu to escalate the civil war, he's taken out and the player is now tasked to recreate the PMC all over again to redeem their reputation by taking on contracts in Asia, Africa, and South America while getting into contact with various sponsors to get money, gold, armor plating and ammo.

are here.note Both sites are now dead, so they're (mostly) archived for reference purposes.

dedicated to the game.