Western Animation / The Story of Menstruation 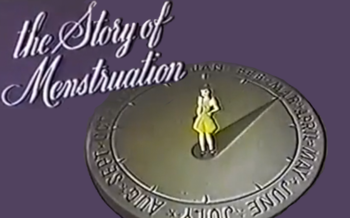 The Story of Menstruation is a ten-minute short from the Walt Disney Corporation produced in 1946, directed by Jack Kinney.

Commissioned by the good folks at Kotex, it is Exactly What It Says on the Tin. This short was not exhibited in theaters, but was produced to be shown in public health classes. There it was used to explain to pubescent girls the physical process behind menstruation. The film talks about pituitary glands and hormones, then gives a basic diagram of the female reproductive system, showing the ovaries and the Fallopian tubes, explaining the process of ovulation and how menstruation follows if a woman does not become pregnant. The narrator then explains that girls should keep a calendar so they know when their cycle will happen and can track any changes. Animation also shows a little girl growing into womanhood, as the film talks about how you can carry on a perfectly normal daily life while having your cycle—go bicycling! Go dancing! But don't let yourself get constipated!

Believed to be the first film of any sort that used the word "vagina" in the screenplay. Also probably a safe bet that it was the first use of "rectum" as well. Used in classrooms for decades, believed to have been shown to over a hundred million schoolgirls.