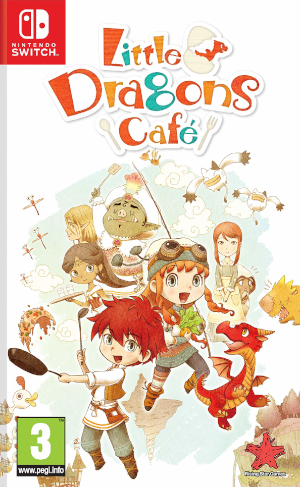 Little Dragons Café is a title by Yasuhiro Wada, creator of the Harvest Moon/Story of Seasons and Hometown Story games. It was released on the Nintendo Switch and PlayStation 4 on August 24, 2018.

The story starts with a brother and sister learning to cook while working at their mother's café. One day the twins notice that their mother has fallen into a deep sleep and cannot be awoken. An old man appears and tells them that they must raise a dragon in order to save her. Working together with three other employees, the siblings must find out how to save their mother while also keeping the café afloat.

Little Dragons Café is similar to its sister-series in several ways. You can grow your own produce and fish in the local rivers to have optimal ingredients to cook with. There is also the dragon husbandry aspect where you raise your own dragon. Like the previous series', you can also interact with customers and help them with their problems.