Series / Unhappily Ever After 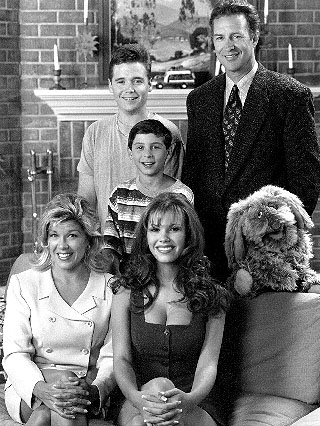 "'Dear Unhappily Ever After: I think your show is nothing but a cheap ripoff of Married... with Children. Fred M., Chicago, Illinois.' Fred: That's ridiculous! Does that show have a bunny that talks like me? Plus, we have three children. Three. Two boys and a girl. You, sir, are an idiot."
— Mr. Floppy
Advertisement:

Unhappily Ever After was an American Sitcom that aired for 100 episodes on The WB and one of the few network launch shows to survive the first year.

In the first season, Jack Malloy (Geoff Pierson), a Jaded Washout used car salesman whose marriage to Jennie (Stephanie Hodge) has just broken up, begins to lose his mind and imagine that his stuffed bunny Mr. Floppy (Bobcat Goldthwait) can talk to him. Starting in the second season, Jack moved back in with Jennie but continued to talk to Mr. Floppy in the basement.

By the show's third season, it became apparent that Jack and Jennie's beautiful daughter Tiffany (Nikki Cox) was becoming a Breakout Character and the de facto co-star of the show along with Pierson. Most of the episodes from that point on revolved around Tiffany and her adventures at school.

The show was created by Arthur Silver and Ron Leavitt; the latter also co-created Married... with Children. This leads to Unhappily being considered a blatant rip-off of Married by many, as much of the humor was similar, though Unhappily was generally more surreal and cartoonish than even MWC got. The show ended in May 1999 with its 100th episode.