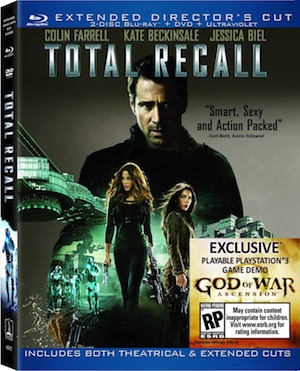 What does God of War have to do with Total Recall?note It's just cross-promotion because Sony owns both.
Lark: Alright! Pre-ordered my copy of Final Fantasy Type-0!
Summer: First of all, don't pre-order. Second, since when did you want that game?
Lark: I don't. But it comes with a demo of Final Fantasy XV.
Summer: Are you serious? You're going to pay sixty dollars for a three-hour demo?
Lark: Well, I already paid thirty dollars for a one-hour demo when I purchased Ground Zeroes.
Summer: That's true.
— Fandumb #35

Basically this is when a work sells itself on including a preview for a much more anticipated work. This is often done with second string titles that would fizzle out on their own. This has become less prevalent (or at least less successful) with the rise of easier video sharing and video game demos on the Internet, but still there are some fandoms dedicated enough to shell out cash for a ticket to Movie You Might Have Ignored Completely if it means they get a chance to see just an ad for Everything You Ever Liked: The Movie.

This is also done on TV shows. You get a trailer (more often called a "sneak peek") packed somewhere in the commercials (although usually at the end) for an anticipated blockbuster.

Sometimes this works. A person willing to sit through the actual feature may indeed find something they like about it and become a fan. Other times, they just get the preview they wanted and ignore/throw away the rest.

The inverse is standard procedure, where an anticipated work includes a preview for a less-hyped title, in the hope that attention will rub off on it.