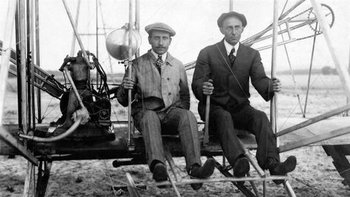 Describe the fathers of flight here.

Wilbur and Orville Wright were two brothers from Dayton Ohio who are known for the first successful controlled, powered and sustained heavier-than-air human flight, on December 17, 1903 in Kitty Hawk, North Carolina. For the two years that followed, the two of them worked on the machine to create the first practical fixed-wing aircraft. Although they were not the first to build and fly experimental aircraft, with countless examples from Hiram Maxim's steam-powered testbeds to Otto Lilienthal's gliders, the Wright brothers were the first to invent aircraft controls that made fixed-wing powered flight possible. In fact, the very key to the Wright brothers' success is that their competitors focused on lift and power to make their aircraft ascend while trusting the aircraft would be inherently stable. The Wright brothers on the other hand focused on control with the idea that there is no point getting to the air if you can't be confident that you can reliably control the vehicle once you do that.

What many people do not realize is how fast aeronautic innovation was in the past century. While Wilbur died in 1912, Orville died in 1948 — which means he lived to see the first turbojet planes

, the planes used to destroy two cities, and died two years after a plane successfully broke the sound barrier

The Wright Brothers in popular culture