Film / The Captain from Kopenick 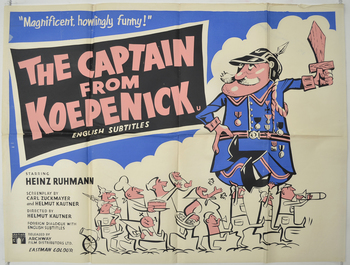 The Captain from Köpenick (Der Hauptmann von Köpenick) is a 1956 film from West Germany directed by Helmut Käutner.

It is based on the true story of a cobbler and petty criminal named Wilhelm Voigt. The film opens in 1894, with Wilhelm having just gotten out of jail after serving 10 years for forgery. He desperately tries to go straight and find work, but he can't, thanks to the maddeningly circular Catch-22 Dilemma of Prussian bureaucracy: to get a job, he needs a passport; to get a passport, he needs a job; to get a place to live, he needs a job. He considers leaving the country and his criminal past behind...but he can't get a passport. Finally Voigt, in desperation, breaks into a Berlin passport office for the sole purpose of forging a passport that will allow him to leave the country. He is caught and arrested.

Twelve years pass; it is now 1906. Wilhelm, who has spent most of his life in jail despite never committing a violent crime or stealing from individuals, is released again, and goes to live with his sister in the Berlin suburb of Köpenick. Nothing has changed: Wilhelm can't get a job because he doesn't have a residency permit and can't get a residency permit because he doesn't have a job. He receives an order to leave town. Eventually he figures out that the whole Prussian bureaucracy is built to make life hopeless for ex-cons like him.

Wilhelm is shuffling about the streets of Köpenick in despair when he sees something unusual: a full Prussian officer's uniform, offered for sale by a street vendor. (A goodly chunk of the film tells the story of the uniform, which used to belong to the mayor, a reservist. He had to get a new one when he got too fat.) Wilhelm hits on a wild idea, which involves the uniform, the German tendency to obey anyone who wears a uniform, and a Bavarian Fire Drill.

became a minor celebrity in Germany after his scam, and his story became something of a modern day folk tale. His story inspired a popular German stage play, which was translated into English, and at least seven theatrical and television films, five (including this one) in German and two in English.