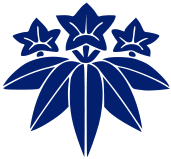 The Minamoto clan crest
In 814 AD, Emperor Saga was facing a certain problem. He had too many children, causing economic stress for the imperial family. His solution? Make them nobles rather than royals. As part of this, he bestowed upon them a surname, as the Imperial line did not officially have one (unless you count "Yamato"). Thus, the Minamoto (源, "Origin", to remind them of the fact that they used to be imperials) clan was founded. Unlike most Japanese clans, they weren't a single family (in fact they were only related by way of Imperial blood), they were cadet branches formed at the pleasure of the emperor. To differentiate the 21 lines, they are often called by their Imperial scion's posthumous name, and their arguably more famous name, Genji, an Alternate Character Reading of the words "Minamoto clan" (源氏). The Minamoto family is the whole reason why samurai dominated Feudal Japan, and many clans (including the other shogunates) were descended from them, or at least claimed to be. The clan lasted from the middle Heian-era as Kuge (aristocrats) to the at least the late Sengoku-era as Buke (samurai), though only prominent for a fraction of the time. One of the Four Noble Clans, including the Fujiwara, the Taira, and the Tachibana.

Lines of the Minamoto include: