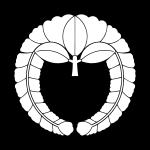 The crest of the Fujiwara.
Before the time of the Samurai, one faction reigned supreme. Founded in the Asuka period by Nakatomi no Kamatari, the Fujiwara clan was the most powerful Kuge clan in Heian Japan. The family ruled as regents practically from day one, and even after the Shoguns came they still held the titles of Sesshō (a regent for a child emperor) and Kampaku (chief advisor to the emperor, but in practice they were regents). In fact, the only other Sekkan (a nickname for both titles) families in existence are the Toyotomi and the Imperial house. They accomplished this by marrying daughters to the Imperial family, who would give birth to the emperors, who would then be raised by their mothers and have loyalty to their Fujiwara grandfathers. Everything was running smoothly... until as was the norm at the time, the emperors would often retire early and enthrone their younger sons. Then when Go-Sanjo became emperor and was not related by blood or marriage, the Fujiwara's power weakened. When he died and his successor decided to Abdicate the Throne in favor of his son, a new faction was beginning to take control. The Cloistered rule (named after emperors who joined Buddhist communities, thus becoming "cloistered") had begun. This led to the rise of the Taira, then the Minamoto, and with them, the samurai. They would see another reign under the sun thanks to Toyotomi Hideyoshi, who ruled as Kampaku (his most famous title being Taiko, a name for retired regents) for a while, but that was short-lived, and even then he eventually started his own clan. Most members of the clan belonged to one of four branches, the Shikike, Nanke, Kyoke, and the big one, the Hokke. The Hokke later spawned the five regent houses: Konoe, Takatsukasa, Kujō, Nijō and Ichijō. The Fujiwara were one of the four noble houses, alongside the Minamoto, Taira, and Tachibana clans.
Advertisement:

The clan legally ceased to exist in 1875 like other historical clans of Japan, when Japanese law imposed the house names as clan members' legal surnames. As a result, modern people of the Fujiwara surname usually have nothing to do with historical Fujiwara, but rather commoners who picked up that as a surname under the same reform.

The Fujiwara clan in fiction: