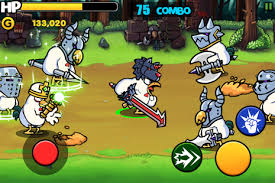 One of the many battles you'll see.
Advertisement:

Chicken Warrior is a Free2Play Beat 'em Up game for IOS made in 2012 by the G and C Software. The game features the titular feathered protagonist going up against his armed brethren in a tournament of some kind. The plot doesn’t go much deeper than that, leaving you free to battle your way through the game’s 128 stages. There is also an arena where you can fight relatively weak enemies for as long as you want.