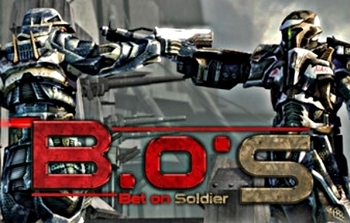 Bet on Soldier: Blood Sport is a 2005 First-Person Shooter developed by French video game developer Kylotonn. Although billed as a Spiritual Successor, it's actualy a Stealth Sequel, continuing the story of Iron Storm 34 years later, in 1998. Troops of the West still wear uniforms with the USWE insignia, faded propaganda posters for the factions line the walls, while men, women and children die for a War that's now the foundation of everything.
Advertisement:

In fact, it's the only constant. Times have changed, along with the factions: The United States of Western Europe consolidated into the WRF, together with the United States of America. The Russomongolian Empire formed the UAN. The Consortium evolved into the Syndicate. Methods of killing people are more refined, as is the technology to protect, transport and fix them.

But war didn't change. It only grew bloodier and more profitable for the wealthy industrialists that control it. The game revolves around the titular Bet on Soldier competitions, which are essentially one-on-one dog fights, except the dogs can shoot (and talk, allegedly). Players assume the role of one Nolan Daneworth, an amnesiac soldier trying to figure out the mystery of his wife's death.

Although the gunplay is fairly standard, the game features a somewhat unique resource management system: everything, from weapons, through armour, to savegames, is paid for with in-game currency, earned for killing people, winning matches and completing mission objectives.