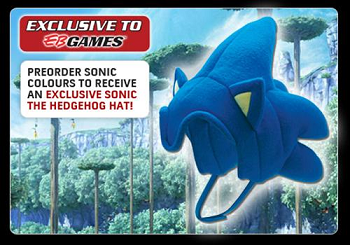 Wait until the game drops in price...or pre-order at full price and get a nice hat? Decisions...
Advertisement:

So you've followed all the press about your favorite video game for months; watching every trailer, reading every interview, playing every demo, until you finally get a release date. You're anticipating this game so much that you head on over to your local Trope Co. game store to pre-order, because you have to be the first person to play this amazing game. But that's not the only reason you pre-order. Only the first shipment of 10,000 units is going to have the super ultra limited edition behind the scenes DVD and bonus cloth overworld map with limited-edition action figures not sold in stores! The game developers just lured you in with a pre-order bonus.

This is a limited bonus offered by retail chains or publishers to incite you to pre-order an upcoming game. Is commonly the game's official soundtrack, a free Strategy Guide, "behind the scenes" featurette, a demo of another game, or the usual suspects. Occasionally, there will be different bonuses depending on the retailer; to get them all; there's a healthy trade on eBay for the codes of such things.

Many game retailers have different Pre Order Bonuses for the same game, meaning that if you're a completist you have to either buy the game several times or hope that some of it later becomes DLC.

Pre-orders are also common with music - digital downloads will often come with pre-order exclusive bonus tracks. Occasionally, independent record stores will provide something extra with a pre-order as well.

In these days where people buy stuff and receive only a download, pre-ordering something became kinda irrelevant since there isn't the problem of the product going out of stock, so pretty much all pre-orders have bonuses or discounts so people will still be tempted to buy the game before anyone from the public knows if it's going to be good or not.

Compare Demo Bonus, where playing the game's demo will unlock a bonus in the full game.