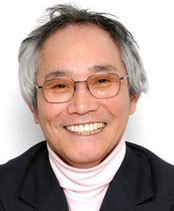 Rokurō Naya (20 October 1932 – 17 November 2014) was a veteran seiyuu from Tokyo. His roles varied from time to time, from the Sugar-and-Ice Personality Aquarius Camus in Saint Seiya, to Well Intentioned Extremists. His older brother, Gorō Naya, was also a seiyuu.
Advertisement:

He also darrined Hiroshi Fujioka for a time in Kamen Rider due to the latter's injury in an accident.