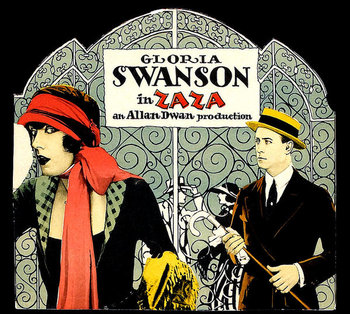 Zaza is a 1923 silent film starring Gloria Swanson. It was based on a French play of the same name, which was first performed in 1898. The play has been adapted to film several other times, including a 1939 sound version starring Claudette Colbert.
Advertisement:

The setting is France in the time before World War I. Zaza is an extremely popular music hall entertainer in the town of St. Esmé, a few miles outside Paris. As a result of sabotage by her jealous rival Florianne, Zaza is severely injured during a performance. She is cared for by diplomat Bernard Dufresne, whom she doesn't realize is married. As it happens, he also tends to forget that inconvenient fact when he's around her.