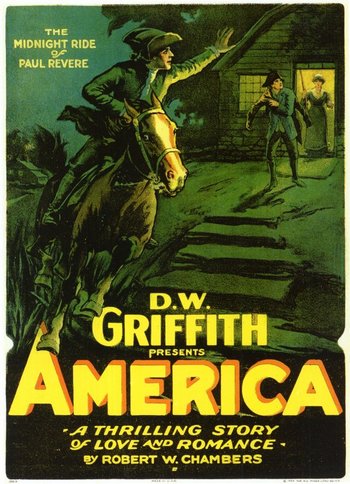 After famously (and quite controversially) covering The American Civil War in The Birth of a Nation, it was perhaps inevitable that D. W. Griffith would eventually follow it up with a historical epic about The American Revolution.
Advertisement:

America: Or Love and Sacrifice is a 1924 silent film starring Carol Dempster, Neil Hamilton, and Lionel Barrymore. Based on the 1905 novel The Reckoning by Robert W. Chambers, the story follows Nathan Holden, a young Patriot, as he fights for American independence and woos Nancy Montague, who is very pretty for a Loyalist. Meanwhile, the evil Walter Butler, with a reprobate army of renegades and Indians, is out to destroy America and claim Nancy for himself.

Despite heavy promotion, the movie was a Box Office Bomb. Its failure is considered to mark the point at which Griffith was no longer considered Hollywood's preeminent director.