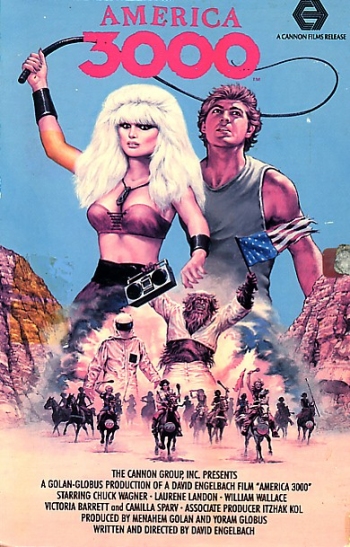 "Nine hundred years after the Great Nuke.
The world man created, he destroyed.
Out of the darkness and ignorance of the
radioactive rubble emerged a new order..."

(In old speak, that means—Crazy!)
Advertisement:

Another Golan/Globus production, America 3000 might conceivably have made a very entertaining Mystery Science Theater 3000 episode, but somehow never ended up on that show.

Somewhere in Colorado, some nine centuries and more After the End, semi-civilized women rule the world from their walled villages while the men have been reduced to savages and slaves. Amid a very literal gender war in which the savage men prey on the women's supply convoys and the warrior women regularly sally forth from their villages either to enslave or exterminate the men, a clever and handsome young boy named Korvis and his trusty new sidekick Gruss escape from one of these slaver raids and set out to build a village of their own for men.

Several years later, having set up their village in the ruins of an old American military base, Korvis and his men organize a raid on the women's village of Frisco to take advantage of a recent change in the leadership. When the raid goes awry due to a few of his mistakes, Korvis misleads the women into chasing only him while his men flee back home in a different direction. Ultimately, this pursuit accidentally lands him in an old Presidential fallout shelter from which he receives a message from the long-forgotten past and retrieves several very interesting and useful bits of old technology for his men.

The women, meanwhile, have political concerns of their own. The previous "Tiara" or queen Reya, much to everyone's surprise, promoted her gentler daughter Vena to be Tiara over her more violent sister Lakella (who had been, and now must continue to be, second-in-command). As one might expect, Lakella is not at all happy about this state of affairs, and Vena is determined to prove herself worthy of her position in order to head off any challenges to her authority from her sister. Further complicating this royal infighting is Tiara Morha and her delegation from the neighboring village of Kansos; Morha has her own plans to overthrow Vena and set Lakella up as her puppet so that she can take control of both villages.

To complicate matters further, Korvis and Vena are developing an instinctive attraction for each other which, due to their respective societies' mutual contempt and loathing for each other, neither of them entirely understands. Thanks to this central tension, and to Korvis and Vena each receiving a mandate to lead their respective peoples into a "New Tomorrow" from their fragmentary mythology, he and she ultimately end up making war and making love and making peace before the credits roll.