Film / After The Dark 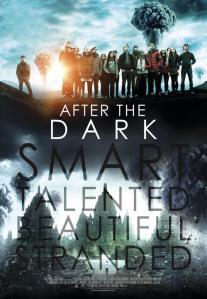 "You know what "apocalypse" actually means? To uncover what you haven't seen before - the way out of the dark."
—Zimit

After The Dark (also known as The Philosophers) is a sci-fi thriller film directed by John Huddles and released on July 7, 2013.

Its Framing Story depicts a class of philosophy students on their final day at an international high school. Their teacher, Eric Zimit (James D'Arcy), assigns them a thought experiment, the exploration of which forms the movie's main plot.

It posits that an atomic apocalypse is approaching, and there's a safety bunker that can support exactly ten people for a year — long enough to escape the disaster. Handing out cards with a different job written on each one, Zimit challenges his students to decides who lives and who dies. When the protagonist, Petra (Sophie Lowe), tries to leave, Zimit forces her to stay by threatening to drop her boyfriend's grade (as Petra does not care about her own).

A battle of wits begins between Zimit and the class...

Note: After certain reveals that occur in the finale, the movie's context is deeply changed. As a result, there will be spoilers below.