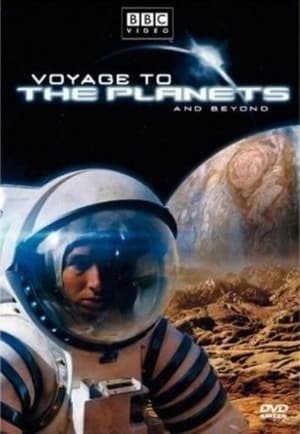 "The Earth is the cradle of humanity, but mankind cannot stay in the cradle forever."
— Konstantin Tsiolkovsky
Advertisement:

Space Odyssey: Voyage To The Planets (released as Voyage To The Planets And Beyond in the United States) is a British two-part science fiction miniseries telling the story of a manned voyage through the solar system, presented in the style of a documentary. It was made for The BBC by Impossible Pictures, written and directed by Joe Ahearne and produced by Christopher Riley, and first broadcast in November 2004.

Five astronauts pilot the spacecraft Pegasus on a tour of the solar system. Their mission takes them to Venus, Mars, through a close fly-by of the Sun, Jupiter and its moons Io and Europa, Saturn and its rings and moon Titan, Pluto, and a fictional comet. Manned landings are made on Venus, Mars, Io, Pluto and the comet, while robot probes are dropped on Europa and Titan.

The crew encounter many hardships and disappointments along the way. The Venus landing almost ends in disaster when the lander Orpheus encounters launch delays, a Titan probe that fails after deployment and the loss of samples from Jupiter's moon Io all test the crew's resolve. The most devastating blow comes when the ship's medical officer dies of solar radiation-induced cancer after Pegasus enters Saturn orbit, forcing the crew to decide whether to continue the mission to Pluto, or abort and return to Earth. In the original British release, the crew decides to press on to Pluto, while the version broadcast in the United States on Science Channel was trimmed for length, with the crew deciding to turn back at this stage rather than continue.

The series adopts a documentary style, and claims to be based on "science fact rather than fiction". It certainly makes a serious attempt to depict the solar-system, voyage, space-craft and planets in a fairly realistic manner based on current scientific knowledge, but it remains a work of fiction, albeit one at the very hard end of Mohs Scale of Sci-Fi Hardness.

This series exhibits the following tropes :