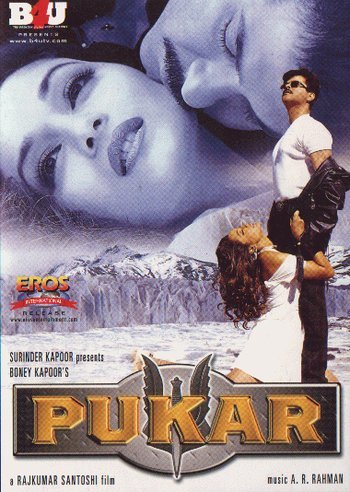 Pukar is a Bollywood film released in 2000. The story centers around Indian Army Major Jaidev "Jai" Rajvansh (Anil Kapoor), who just managed to capture India's terrorist Abrush and lauded as a hero by the Indian people. While on a well-deserved vacation, he returns home to his family where his childhood friend Anjali (Madhuri Dixit), secretly has a crush on him and is determined to be with him 24/7.

Unfortunately, he falls for Pooja Mallappa, daughter of General Mallappa and an aspiring supermodel. Both hit it off almost immediately, leaving Anjali heartbroken and jealous. Observing this drama are Jai's enemies, who decide to take advantage of the situation. Hilarity Ensues.

Essentially an Indian cinematic version of 24 with particularly good Bollywood Masala and the smallest helping of Fatal Attraction added into the mix. Noted amongst Bollywood filmgoers for Madhuri Dixit's performance as Anjali, one of the most layered roles of her career and the only one that wasn't strictly heroic. Anil Kapoor was given the National Movie Award by the Indian Government for what was considered the best performance of his then-twenty year career.