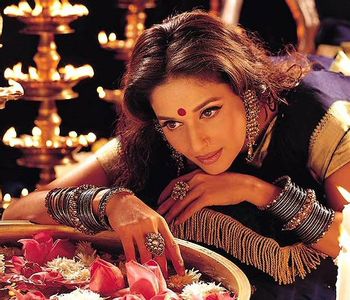 All hail the Queen of Bollywood
Advertisement:

If, in the grand hierarchy of Bollywood, Amitabh Bachchan is its Emperor and Shah Rukh Khan its King, then the title of Queen would go, without a doubt, to Madhuri Dixit (aka, the Dhak Dhak Girl, the Diva, and Madz, born 15 May 1967 in Mumbai, India).

Classically trained in the Kathak form of dance, her skills coupled with her ability to act and her 100-watt smile made her an all-rounder in an industry where most actresses excelled in only one or two (and perhaps none) of those categories. When compared to Hollywood actresses, she is always compared to Julia Roberts, who has a similar smile and face.

Debuted in 1984, became famous in 1988, and ruled Bollywood until her retirement in 2002 to spend time with her then-newborn son, she continues to inspire new actresses today, and producers all over the Bollywood scene continue to look for the "next Madhuri", who herself is often compared to and placed at the same level as other legendary actresses of the yesteryear, including Nargis and Madhubala.

Moved back to India in 2011 and has a couple of comeback roles in movies in the works.

She is an example of the following tropes: