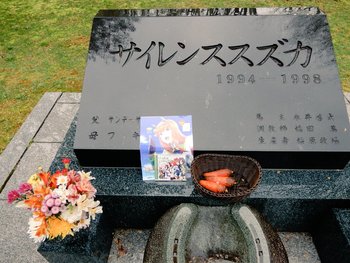 The grave of the Real Life Silence Suzuka, adorned with an image and a CD of his anime counterpart
Advertisement:

The entire series is one big Shout-Out to Japanese Horse Racing, with the plot appearing to follow, mostly, the 1998 season (while pulling in Special Week's maiden race from 1997), then, from Episode 8, the 1999 season. A lot of little Real Life facts get reflected in the anime, to the point that, weirdly, Very Loosely Based on a True Story applies.

A Japanese Youtuber known as Anime Fan has released, so far, two

covering real life facts that are reflected in this anime. A few of the prototypes of the main characters can be seen in action in this video. One can also search for the race record of every horse and look for videos of the races to see more of the originals.

Shout Out to other media

Vodka: How heavy are the dumbbells you lift, Teio?