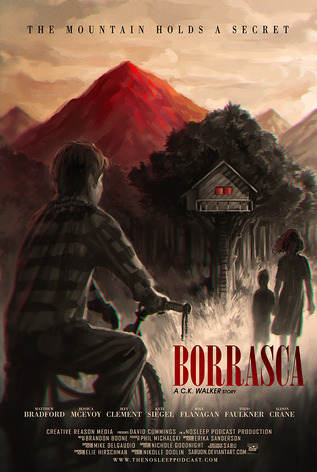 ''Underneath the Triple Tree, there is a man that waits for me, and should I go or should I stay, my fate's the same either way...''
Advertisement:

Borrasca is a 2015 novella written by C.K. Walker.

Sam Walker moves to the town of Drisking, Missouri one summer and quickly befriends two other kids, Kyle and Kimber. They take a trip to a strange treehouse, where you are supposed to carve your name on the tree or "you'll disappear". When Sam's sister, Whitney, actually does disappear a few months later, he passes five lonely years wondering what happened to her. When more people start disappearing suddenly, the three take it upon themselves to find out what's happening to all the disappearing people what connection the disappearances hold with the mountain outside of town.

Due to popular demand, or arguably due to her own interest, Walker made a sequel titled Borrasca V, which takes place years after the events of the first part.

It was adapted into a weekly podcast by QCODE which was released from May to July 2020. It featured Cole Sprouse as Sam Walker and Lisa Edelstein, Louise Lombard, Hynden Walch, and Dylan Bruno in supporting roles. It can be listened to on QCODE here

Borrasca (and its sequel Borrasca V) contains examples of: