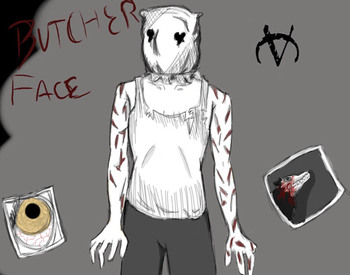 "Butcherface" is a short story written by A.J. Garlisi, originally published on Reddit's Nosleep forum in April of 2012.

The story concerns an unnamed narrator, his friend Chris, and a mysterious box they find under the floorboards of Chris's basement while remodeling his new house. The horrifying contents in the box lead to several terrifying encounters with the elusive man only known as "Butcherface", and Chris and the narrator's attempts to find out who (or what) he is and just what exactly his overall goal is..

A smash hit when it was realeased, it has now joined the ranks of one of the internet's most famous Creepypastas, alongside such classics as "Jeff the Killer", and "Ben Drowned", although "Butcherface" is much more professional and well-written than its infamous counterparts. In addition, it is one of the only stories on Nosleep that has become famous outside Reddit, along with other stories form the subreddit such as "Borrasca" and "Feed the Pig".

It has been read and recorded by at least fifteen different Youtubers, and a professional version was featured on The Nosleep Podcast.