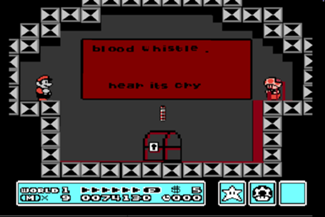 is a Super Mario Bros. creepypasta based off of Super Mario Bros. 3. It takes the form of a blog of a rather melodramatic college student as he plays through a ROM Hack titled "SMB3:BW" that turns out to be full of "realistic blood."